Hi all! Thank you so much for creating this site! I haven’t been suffering with this for as long as many of you, but I’m grateful to find other people who are going through this too!

Mine started in July 2019. Just 1 gross, oozy, raw lesion near my chin that wouldn’t heal. I get pimples once in a while and I knew right away that this wasn’t a pimple. It came to a head fast, was itchy, and oozed the yellow liquid.

By mid-August I had a rash of white-ish bumps on the sides my chin (folliculitis?) and probably 10 raw, weeping sores across the lower part of my face. It was so gross and I went to a walk-in clinic. I’d recently been on 3 courses of antibiotics (unrelated to my face) and thought it was yeast. She diagnosed it as impetigo and gave me mupirocin.

I used it and it helped! Some of the really infected ones healed a bit, but it didn’t clear completely. And the folliculitis didn’t budge.

At this point, September-October, the folliculitis around my chin started developing into bigger lesions. One would get itchy and turn white. If I squeezed it (sorry, gross, I know) a solid, white coloured thing would come out and then it would heal. If I left them alone, they’d turn into brown marks that never went away. I also continued to get the single, big ones on my jaw, cheeks, beside my left eye, and one between my eyebrows (ugh!).

I finally saw a dermatologist in October. He said it was rosacea and gave me metrogel. I didn’t have the redness or flushing, or any of the other symptoms of rosacea, but I went with it and tried the metrogel.

It helped a bit. The folliculitis responded to it pretty well — I’d put it on at night and by morning there were fewer bumps. I put it on again in the AM, but by the end of the day they were all back again.

From October to January, I was using metrogel, acids (glycolic, salicylic, and lactic), mupirocin, and a LOT of benzoyl peroxide — I thought for a while maybe it was acne?! But none of it cleared my face.

Some other things I tried during that time:

Finally, in early January 2020, I went back to the dermatologist. By that point I had convinced myself that it was demodex and I was hoping the doctor would give me something for it. I was sitting in the waiting room and I found this website! I read about ivermectin for the first time (thank you!) and went into the appointment hoping that he’d prescribe it — and he did!! I didn’t even have to ask for it. He said I had perioral dermatitis and to use it at night.

I started using it 5 days ago, along with metronidazole in elidel cream (in the AM and PM). I’m still in the die off stage, so my face looks pretty horrible — but the brown marks that have been there for months are HEALING!! I thought they would never go away. The folliculitis is also healing (well, purging, but no new ones are developing!). The weeping sores are closing up. I have 1 new big one on my chin, where it was always the worst, but overall I’m seeing a huge improvement! I am so glad to have found this medication and this website — thank you!

I’m including some pictures. I didn’t take many when it was very bad — I could barely look in a mirror. I used to have flawless skin (that I worked very hard on to achieve!). It’s been devastating going through this whole ordeal. I hope this is finally the end of it! 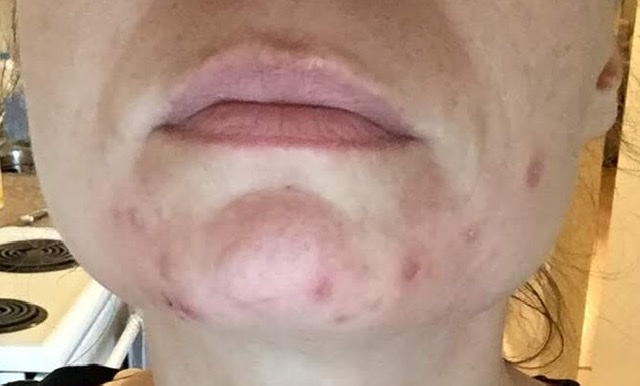 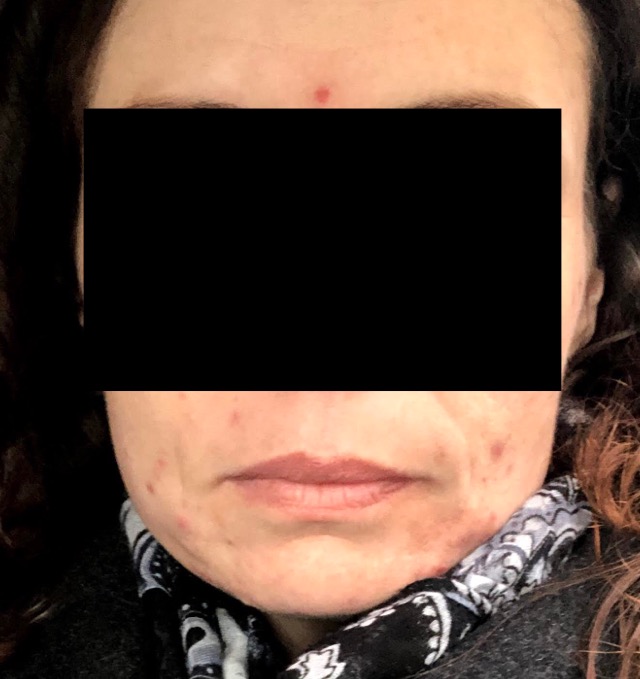 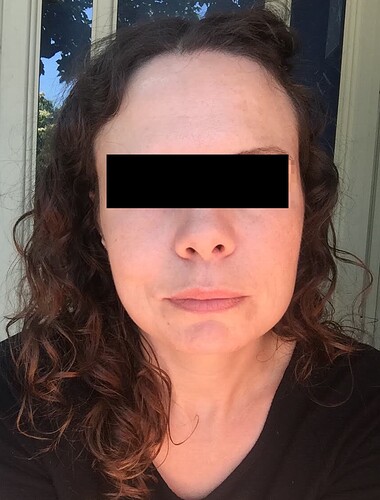 Oh, some other things that didn’t work/help:

However, for me, it started just after I started using retin-a. At first, I thought it was the “purge” you get when you start retin-a (i.e. your face breaks out in pimples) — but they just weren’t pimples. But my skin was in really bad shape — my moisture barrier was shot from the retin-a, my face was all flaky and red.

I also had a LOT of work stress happening around then (and all though the fall and winter).

So, I think the combination of fragile skin from the retin-a and lower immunity due to stress is what allowed the dermodex to take over my face. I just hope I can get them back in check!

I read about ivermectin for the first time (thank you!) and went into the appointment hoping that he’d prescribe it — and he did!! I didn’t even have to ask for it. He said I had perioral dermatitis and to use it at night.

I started using it 5 days ago, along with metronidazole in elidel cream (in the AM and PM).

Ivermectin comes in two forms: topical as Soolantra (or Rosiver) or an oral form as a pill or tablet. Which form did he prescribe?

In my case, topical metronidazole didn’t do much, whereas topical ivermectin (Soolantra) did work.

It’s the cream — rosiver or something. So far it’s been amazing! I wish I’d started this months ago.

In my case, topical metronidazole didn’t do much, whereas topical ivermectin (Soolantra) did work.

So, I started both at the same time and I’m not sure which one is more effective. I’m guessing it’s the ivermectin? The biggest improvement I’m seeing so far is the old, brown lumps are fading and shrinking — I think that might be from the metronidazole? Since it’s an anti inflammatory? Whereas all the bumpy stuff is coming to a head — I think that’s from the ivermectin? Since it’s killing the demodex and potentially causing more inflammation. Either way, the combo is doing wonders for my skin. Thank goodness!

Before this all started, I was really into skincare and I’m looking forward to being able to re-start all my normal products again. Right now I’m only using those 2 cream and the overall qualify of my skin is

. But hey, it’s better than being filled with oozing sores!

I think that might be from the metronidazole? Since it’s an anti inflammatory?

Good to hear that it’s working for you

Oh interesting, I didn’t realize that the ivermectin was anti inflammatory too. I’m almost out of the other cream and it’s $100 for a tiny amount that lasts 2 weeks, so maybe I won’t bother getting more…

Do you have a 30grams tube? Some people are able to use it for many months by using a small amount. If you dampen the face with a bit of water, than it’s easier to spread a small amount over the face.

Wow! Your story Is so similar to mine. Mine started about a year 1/2 ago after we took a trip to Cuba very hot humid location I noticed my benzol peroxide proactive was not only not working, but was making my face worse! Last month I developed blepharitis. My eyes were so itchy. Weepy, red. Went to the Dr and was diagnosed. They gave me an antibiotic and sent me home. Nothing worked. My small little zits developed into giant oozing yellow crusts that would be heal for anything!!! I was literally going crazy. The face that I have BUGS on me/in me and the depression followed. I found this forum (Thank God) and another web site that is saving not only my face and eyes, but my sanity! I’m still on the die off stage, and I believe I’ve had these mites for a long long time, because they just keep oozing out after ivermectin applications. I started Ivermectin orally 1 week ago. On my 1 week dose mark today. I plan on taking it every 4 days until these mites are GONE! THANK YOU for your story and bravery to post your photos as well. I’m a cosmetologist and my looks affect me so much. This is a long journey but I am determined to beat this and I wish you all the best with your journey as well!

@MinneSarah what’s the other website that you found?
Are you taking both oral and topical ivermectin?

Do you think it was caused by your trip to Cuba?
Maybe a stupid quest, but did you get in contact with animals? And what about you @oozy-suzy? (I picked up a hedgedog once on a road, to prevent it from being hit by cars. But these type of animals often carry disease. But it was too long ago to remember whether is was shortly before I noticed the skin problem.)

Thanks for your reply! I’m sorry you’re going through this too — I could relate a LOT to your post too! It sounds like we’re in similar stages. I got my ivermectin cream on Jan 2, so I’m about 11 days in now. I’ll try to post an update pic — it’s better than it was, but still not 100%.

(As for posting pics, they’re somewhat anonymized? I hope no one I know recognizes me anyway! Although, I don’t wear make up, so I’ve been walking around with my face like this for months now, sigh.)

I hear you on the gross out factor. I can’t look at pics of demodex. I am so freaked out with the idea of mites in my skin — I scroll by pics really fast. If I took the time to look at them really closely, I’d probably want to pour bleach on my skin or something

That must be hard being a cosmetologist! I’ve completely stopped dating since my skin started getting bad. I feel like there are some things you just can’t do if your skin is full of open, weeping sores, you know?

The website is delusionalinsects.com
It is a very detailed web site about demodex invasion and has TONS of info. This mad took lots of time and energy into creating this web site and some of the info is very interesting and a little odd. It’s a lengthy read but well worth it.

Interesting! As long as it’s not full of pics, I’ll check it out!

Hey i had dandruff, seb derm and blephritis for years and started a treatment plan for the blepharitis. Shortly after that lesions started to appear on my face and then after about 1-2 years they started oozing. The lesions and oozing gradually worsened until it was unbearable. Rosiver has resolved everything including the dandruff, seb derm and blepharitis. It’s amazing!

thanks for this review. i changed my diet lately and it does seem to work, but by far not perfectly, while medications change do not really help. will try Rosiver if doctor would agree. thanks

Just wanted to give you guys a quick update. I’m about 7/8 weeks into treatment with ivermectin cream and I still have ups and downs. But here’s my face today!

Edited to add another pic, because the one above is deceiving! My face is still pretty terrible, sigh.

not sure but it does seems to look at least a bit better than before, or i’m wrong?.
so, i started the diet and it seems to help but i still want to add something to get a better result, do you think it would be helpful?

I’m not sure about diet. It hasn’t been a factor with my skin.

Another update — my skin is looking especially bad this morning.

I am SO sick of this! 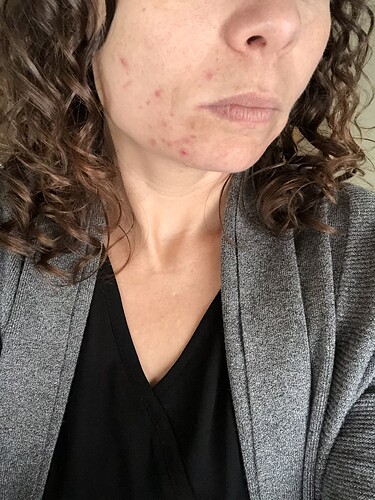 my doc said that sometimes it could be bcoz of an allergy, for example i have allergies to some desserts. not saying that this is your case, but you may want to check for allergies, if you haven’t already.